To share your memory on the wall of Marion McLeod, sign in using one of the following options:

Provide comfort for the family of Marion McLeod with a meaningful gesture of sympathy.

Marion was born and raised in Whitby, Ontario. At a young age, she developed a keen interest in acting, first performing on-stage at Whitby Children’s Theatre at age 15. Marion went on to become an accomplished stage and television actress, director and playwright, joining one of Toronto’s first alternative theatre troupes, “Toronto Workshop Productions” in 1959 and acting in and directing more than 40 community theatre projects over the next few decades. She also performed with Whitby Modern Players, Oshawa Little Theatre and Act II Studio; appeared in multiple television commercials; and went on to teach her craft through a theory of movement course at Ryerson University.

A passionate traveller, Marion visited many countries around the world. She was also a talented knitter whose beautiful sweaters and stuffed toys delighted many friends and family members over the years. After her retirement from Shell Oil, Marion focused on giving back to her community, volunteering at Fairview Lodge in the 1990’s and Ontario Shores Centre for Mental Health Sciences in the 2000’s.

Marion will be greatly missed and always remembered by those who had the privilege of knowing and loving her. The family wishes to thank the wonderful team at Fairview Lodge for demonstrating incredible kindness and care for Marion during her final years.

A Celebration of Life will take place at W.C. TOWN FUNERAL CHAPEL, 110 Dundas Street West, Whitby on Thursday, October 3 from 1:00 – 3:00 p.m. Memorial donations made to Fairview Lodge would be appreciated by the family. To send a message of condolence, please visit wctownfuneralchapel.com
Read Less

Consider providing a gift of comfort for the family of Marion McLeod by sending flowers.

We encourage you to share your most beloved memories of Marion here, so that the family and other loved ones can always see it. You can upload cherished photographs, or share your favorite stories, and can even comment on those shared by others. 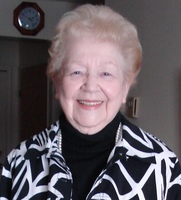