In Memory of
Joan Elizabeth
Reed
2018
Click above to light a memorial candle. 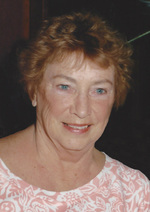 REED, Joan -
Peacefully, surrounded by family, at Fairhaven Nursing Home in Peterborough on November 7th 2018 in her 90th year. Predeceased by her husband Leslie. She is survived by her 5 children: daughter Susan and her husband Gary of Erin, son John and his wife Betty of Oshawa, son Leslie Jr. and his wife Mary Pat of Peterborough, son Chris and his wife Joanne of Ottawa and son Brian and his wife Stacey from Whitby. She is also lovingly remembered by her 12 grandchildren and 20 great-grandchildren. A life-long resident of Whitby, Joan served on the school board for a number of years and worked at Anderson Collegiate until her retirement in 1994. Visitation will be held at W.C. TOWN FUNERAL CHAPEL, 110 Dundas Street East, Whitby, on Monday, November 12th 2018 from 2 – 4pm followed immediately thereafter by a funeral service in the funeral home chapel at 4pm. In lieu of flowers, memorial donations may be made to the Alzheimer’s Society or the charity of you choice. Condolences may be expressed online at www.wctownfuneralchapel.com.
Printable
Share on Facebook
Recently Shared Condolences
Leave a Condolence
View All Condolences
Recently Lit Memorial Candles
Light a Memorial Candle
View All Candles
Recently Shared Stories
Share a Story
Recently Shared Photos
Share a Photo
View All Photos