In Memory of
Ida Joanna Ing
Quan
2018
Click above to light a memorial candle.
Menu
Send Flowers
Plant a Tree In Memory of Your Loved One
Click Here 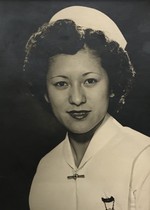 QUAN, Ida Joanna Ing -
We are saddened to announce the death of Ida J. Quan (neé Ing) at the age of 96 years. Her passing took place on June 8, 2018 at Humber River Hospital. She was predeceased by parents Henry and Mary Ing; brothers Harry and Raymond, and sister Dorothy. She is survived by dear husband of 66 years, Dick, sons Gary and Brian, brother Albert, sisters Amie and Jean, and many nieces and nephews. Upon graduating from Morrisburg Collegiate Institute, Ida pursued a nursing career and received her R.N. from Herbert Reddy Memorial Hospital in Montreal, Quebec. Post graduate studies at USC Berkeley, California followed for her certificate in Obstetrics. Upon her return, she was employed at the Ottawa Civic Hospital, Ottawa, Ontario. Dick and Ida were married in Vancouver, British Columbia in September 1952, and eventually settled in Toronto, where she worked at Toronto Western Hospital. She temporarily stopped work to raise her two sons. Then she returned to nursing at Humber Memorial Hospital and York-Finch Hospital. Ida was a very kind, generous and refined lady, who will be truly missed by all who knew her. She will be remembered with much love. Ida’s visitation will be on Thursday, June 14, 2018 from 6-8 p.m. at NEWEDIUK FUNERAL HOME, KIPLING CHAPEL, 2058 Kipling Avenue (North of Rexdale Boulevard). In lieu of flowers, a donation to the Cardiology Unit of your preferred Hospital “In memory of Ida Quan” would be most appreciated. Online condolences at newediukfuneralhome.com