Memorial Candle Tribute From
Newediuk Funeral Home
"We are honored to provide this Book of Memories to the family."
View full message >>>
Memorial Candle Tribute From
Ursula Rattey
"In my thoughts forever May this candle be a symbol of my everlasting affe"
View full message >>>
In Memory of
John "Jack"
Quigg
2016
Menu
Send Flowers
Plant a Tree In Memory of Your Loved One
Click Here 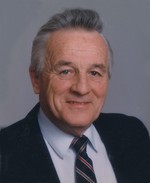 Passed away comfortably due to sudden heart failure at Sunnybrook Veteran’s Centre. Beloved husband of 67 years to Joan (Traynor). Predeceased by son, Tom (Jennifer); loving father of Jim (Jane), Susan, Maureen and Joanne (Ron); cherished grandfather of Christopher, Candice (Matt), Mitchell, Brendan, Madeleine, Courtney and Liam. Jack’s family would like to extend a special note of gratitude to Ursula Rattey and Parvin Zasarani. Jack received outstanding care from the nurses and staff at Sunnybrook Ventran’s Centre K3C Wing throughout the entirety of his four-year stay. Resting at NEWEDIUK FUNERAL HOME, KIPLING CHAPEL, 2058 Kipling Avenue, (North of Rexdale Blvd.). Visitation will be held on Sunday, June 12, 2016 from 2-4pm and 7-9pm. Funeral Mass will be celebrated at St. Benedict Church, 2194 Kipling Avenue, on Monday, June 13, 2016 at 10:00am. Donations can be made to the Alzheimer’s Society or Sunnybrook Veteran’s Centre. Online condolences at newediukfuneralhome.com