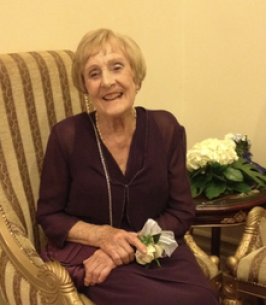 POSEDOWSKI, Brunhild (Hilda) Margarete Elisabeth -
It is with great sadness that we announce the passing of our beloved Brunhild (Hilda) Posedowski (nee von Massow).
Brunhild (Hilda) passed on November 16, 2022 at the age of 94. Predeceased by her loving husband, Heinz; Hilda is survived by her sons, Ralf Posedowski and Bert Posedowski, her grandchildren, Hannah (Enrico) Capocci and Dr. Rachel Posedowski, great grandchildren, Juliana and Rebecca Capocci, and sister, Ehrengard von Massow.
Brunhild (Hilda) was born in on February 12, 1928 in Stralsund, Germany, to parents, Helmuth and Ursula (von Buch) von Massow. The eldest of three, she was sister to Jürgen and Ehrengard. She and her family lived on a farm on the island of Rugen. As an adult, Brunhild (Hilda) worked as a nurse. She also served in WWII as a nurse on a military base south of Munich, where she met her husband, Heinz in 1955. The two were married in 1956. In 1957, they made the choice to leave Germany and immigrate to Canada with their newborn son, Ralf. Brunhild (Hilda) and her husband Heinz built their life and grew their family in Toronto until the 1980s when they moved to a farm in Burks Falls, Ontario. After living up north for over 20 years, Brunhild (Hilda) moved back to Toronto to be closer to her family.
She will be deeply missed and remembered by her family and friends. A memorial service will be held on Tuesday, December 6, 2022 at 11:00 am at Davenport-Perth United Church, 1900 Davenport Road, Toronto, ON M6N 1B7. Online condolences at newediukfuneralhome.com