To share your memory on the wall of Doris Agatha Downer, sign in using one of the following options:

In her pursuit for a better life, Doris relocated from Ulser Spring in her early adulthood to Kingston, Jamaica. There she met Hubert. The two got married and together gave life to six beautiful children. Doris’ life is marked by her love for the Lord. She was a living sermon to her children, grandchildren, and great grandchildren. Her service to the Lord was steadfast. Her loyalty to and love for Christ, His word, and His people were well-pronounced. She was a 21st century virtuous woman, a woman of nobility and character. Doris was not a certified college-educated counselor or psychologist, but she was a very wise counselor. It was her natural response to counsel anyone that crossed her path, especially young people. As a result, as aged as she was, Doris had many admirers, confidants, and friends who are decades younger than her.

As described by Proverbs 31, Doris worked eagerly with her hands, wisely invested her money, and provided well for her family. In her early years, Doris was a seamstress. She could make the most beautiful and any piece of garment without pattern. Her love for clothing also showed in the way she dressed. When dressed for church or any occasion, Doris could out-dress anyone her age and even younger.

Doris worked in the health industry as a Personal Support Worker for over 20 years. She served at Queen Elizabeth Hospital until she retired at age 65. After retiring, Doris invested her time in visiting the sick, caring for sick members of the body of Christ, and in prison ministry, serving women. It was customary for Doris to take several buses to go across town with packages of food to visit and care for the sick. Her prison ministry entailed weekly visits to the Kingston Penitentiary in Ontario, Canada where she counseled and ministered to incarcerated women. This ministry yielded several adopted daughters who remained in touch with her well after she stopped the prison ministry.

Doris was an active member of Shiloh Church of God, Seventh Day until she returned to Jamaica where she resided for nine years. Upon returning from Jamaica, The Church of God Sabbath-Keeping became her place of worship.

Doris is Mother, Mom, Mommy, Mama, Grandma, Gram, Gong Gong, Gram Cracker, Auntie Dor, Mother Downer, Missionary Downer, and Mother D to many. She lived an unselfish life, but she was sure to “occupy” as said in scripture until… She travelled, enjoyed church – especially conventions, enjoyed fashion, danced and laughed a lot, cooked and ate a lot, and certainly enjoyed her family. She touched many lives and will always be remembered. She is survived by her brother Lester, sisters Pauline and Millicent, six children Hazeline (Toots), John (Bunny), Peter, Patricia, Rosemarie, and Paul, 19 grandchildren, 15 great grandchildren, many brothers and sisters in Christ, and many friends and relatives who love her dearly.

Mom, your legacy will live on. Not having you in our lives is extremely painful, but it is glorious at the same time. You transitioned into the portals of glory, and upon entering, you received a standing ovation. Enjoy your rest, you earned it.

Consider providing a gift of comfort for the family of Doris Agatha Downer by sending flowers.

We encourage you to share your most beloved memories of Doris Agatha here, so that the family and other loved ones can always see it. You can upload cherished photographs, or share your favorite stories, and can even comment on those shared by others.

Posted Jan 19, 2021 at 10:28am
Sending our deepest condolences and prayers to the Downer family. Love, Penny and the CSC family.

10 trees were planted in the memory of Doris Agatha Downer

Sister Rosemarie, my condolences to you and the family. Every time I met Mother Downer she always had a beautiful smile and a great hug. She's gone to her heavenly rest but she'll live on in you.
DR

Posted Jan 18, 2021 at 09:56pm
"Doris Agatha Downer" brought so many gifts to our life. Although gone from us but never forgotten! We send you thoughts of comfort and peace.

Posted Jan 18, 2021 at 04:13pm
Our deepest condolences to the Downer family. Hope you will find comfort knowing that Mother is resting peacefully. Janette Campbell and Family.

Posted Jan 17, 2021 at 05:32pm
Our heart goes out to you with sincere love and condolences . You've impacted our lives in many ways. Remember that love is stronger than death.

Posted Jan 19, 2021 at 02:21pm
My deepest condolences to the family. Mother Downer was a force to be reckoned with. I will always be grateful for the love and support she showed us. 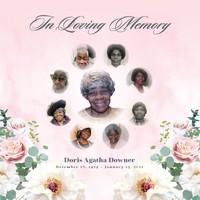 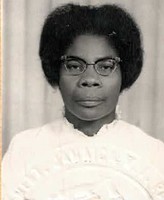 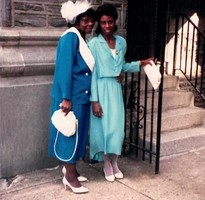