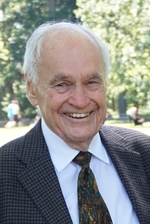 Jimbo left the world on Thursday, July 30 surrounded by love, stories, and caring with all of his family at his side. Nicknamed the world’s most affable man by his children; Jimbo brought love and kindness to all – with a unique ability to make whomever he was with feel special.

Jimbo was born in Ottawa, growing up with his parents, Dr Vernon and Marion Craig (Ross); and brother Ross. Summers spent on the Rideau River gave him his passion for sailing. A life of generousity and commitment to liberalism was learned early as he observed his father caring for his patients regardless of income during the Depression. Jim attended Glebe Collegiate, where he first met the love of his life, Helen; but didn’t realize it until many years later. In 1953, Jimbo graduated from Queen’s University with a B.A. majoring in Political Science, receiving the Tricolour Award. He went on to study law at Osgoode Hall and was called to the bar in 1955. Passionate, committed to excellence, and loyal to his colleagues and clients; Jim practised law with Aylesworth Thompson for almost fifty years including the firm merger creating Aylesworth Thompson Phelan O'Brien. Committed to social justice, Jim received an Ontario Service Award for 65 years of volunteerism for Queen’s University. Many of his other volunteering included creating events for Make a Wish and the Yellow Bus.

Jimbo and Helen (Reid) married in 1956, and were partners in love, adventure, travel, bridge and fun shared with family and friends for over 60 years. It was a partnership of balance, strength, and support defined by commitment to family. Their legacy of love lives on through their grandchildren. With “Carpe Diem” as his motto, Jimbo lived each day to the most. Over 50 years were spent at Camelot on Lake Simcoe. With Helen by his side, he welcomed all with a grin and a twinkle in his eye that lightened up the world. Summer days were defined by sailing, highly competitive card games, endless hours in the water with children and grandchildren, and many vigorous tournaments of shuffleboard, badminton, and bocce ball.

Jimbo was a creator of joy and good times, always making things happen for his friends and family, including:“Bad Boys Lunch” (55 years), Shaw Festival outings, Buffalo football trips, travel adventures and doubles squash games followed by “Craig specials.” Jim's positive attitude, zest for life and caring compassionate personality endeared him to all who had the privilege of calling him a dear friend. He was a humble man, who exemplified the good life through his love of humanity, keen intelligence, respect, and spirit of inclusivity. The world will be a quieter place without Jim to offer “stand-ups.”

The family is grateful to Mina Pascablo, for her compassionate caring of Jimbo over the last few months. A Celebration of Life will be held once we are all allowed to gather. In lieu of flowers, please consider a donation to Temmy Latner Centre at Mount Sinai Hospital or the Toronto Civic Garden Centre in the honour of James and Helen Craig. Online condolences at newediukfuneralhome.com