To share your memory on the wall of Hilda Alcock, sign in using one of the following options:

Provide comfort for the family of Hilda Alcock with a meaningful gesture of sympathy.

Consider providing a gift of comfort for the family of Hilda Alcock by sending flowers.

We encourage you to share your most beloved memories of Hilda here, so that the family and other loved ones can always see it. You can upload cherished photographs, or share your favorite stories, and can even comment on those shared by others.

Posted Feb 11, 2020 at 09:20am
Carl and Family, we were sorry to hear of Hilda's passing.May you feel the presence of God during these days of sorrow.
Harold and Margaret Burt
St John's citadel
Comment Share
Share via:
MD

Posted Feb 10, 2020 at 09:02am
Carl and Family,
We just want to remind you that we will be keeping your family in our prayers during this time of sorrow. However, we are also rejoicing because your loved one is now in the presence of Jesus, whom Hilda loved and served for many years. We have that hope of life eternal. We have many fond memories of our ministry at the Haven of Hope. We certainly appreciated your faithful support in so many ways, and were always blessed to witness first hand how you reached out to so many people in need of love and understanding. As you reflect upon your dear one, remember that she leaves behind a fine Christian legacy ; a sterling example of what it means to be a follower of Jesus Christ. No doubt you will miss her but we trust that your memories will be happy ones and that you will endeavor to live in such a way that we will all meet again in a land where there will be no more parting. God bless you Carl and may God comfort you each one.
Comment Share
Share via:
CC

Posted Feb 09, 2020 at 08:31am
To Carl and the Alcock family. We are so sorry to hear of your loss. We don’t mourn as the world mourns, for we know, that absent in the body is present with the Lord. Our sister has fought the good fight of faith and today her faith, is no longer faith, but sight as she is now with Him. Please be assured of our prayers during this time.
Charles & Shirley Crane

Posted Feb 08, 2020 at 09:14pm
To Carl and all of the family so sorry to hear of our sisters passing,due to circumstances I could not make the funeral. Hold all those precious memories close to your heart's. My sister is now with her Lord whom she loved dearly. We will all meet again someday on that beautiful shore, where there will be no more pain,sickness or sorrow.

Posted Feb 08, 2020 at 06:24pm
Carl and Family
Sorry to hear of the loss of Hilda, your wife and mother.
We have many happy memories of our time together.
Condolences
Dot Bishop and Family
Comment Share
Share via: 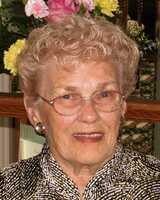