To share your memory on the wall of Charles Percy ("Bud") Fowler, sign in using one of the following options:

Provide comfort for the family of Charles Percy ("Bud") Fowler with a meaningful gesture of sympathy.

Donations are being accepted for: Sunnybrook Hospital - K Wing.

Consider providing a gift of comfort for the family of Charles Percy ("Bud") Fowler by sending flowers.

We encourage you to share your most beloved memories of Charles Percy ("Bud") here, so that the family and other loved ones can always see it. You can upload cherished photographs, or share your favorite stories, and can even comment on those shared by others.

Posted Feb 03, 2020 at 05:05pm
With loving and fond memories of my Uncle Bud. A great and caring man who always was smiling.

Posted Jan 31, 2020 at 02:42pm
I knew Buddy through the "Drummond Street Old Boys" hockey club. He had a great outgoing personality and was a joy to be with. My favourite memory of Bud was a tournament hockey game where a guy gave him a hard shot to the body. This was not acceptable as it was well known that we were always the oldest team at any hockey tournament. Bud got so angry, he put his shoulder down (like he did in his football days) and took a good hard run at the guy. The guy was probably 25 years younger than Bud but the hit re-kindled something in Buddy we rarely saw, his competitive spirit. Rest in peace old friend.
Ron Cannata
Comment Share
Share via:
KW

Posted Jan 18, 2020 at 02:41pm
It happened at 393 university ave, the Bell building, some time in the 60s. After working hard one weekend saturday , it was time to have a little rest or whatever. There were 5 or 6 of us or so. We were young and full of ourselves and sort of in good shape. We decided to have a contest to see who of us younger guys were able to do the most push-ups. I was the last of three who thought we could out perform the others . Two older guys including Bud who were counting the number of push-ups the three of us could do. I did 75 push-ups, 1 more than the other 2 guys could do. Of course I was the winner. BUT to our amazment, old man Bud said he wanted to try and see how far he could go. Down on the floor he started, puffing when he got to 65 or so. We thought
he was finished. Puffing a little harder, at 70. He was done . THEN, to our astonishment, with 1 hand behind his back 71, 72, 73, 74, 75, 76, 77, 78. Thats how I remember a real supper guy. And my long time super hero. I'll never forget my friend. 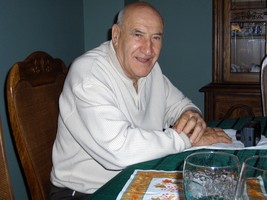 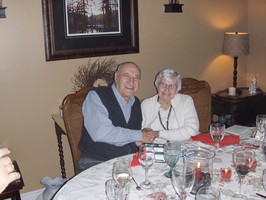 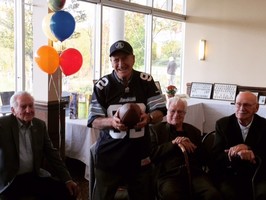 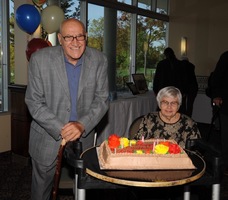