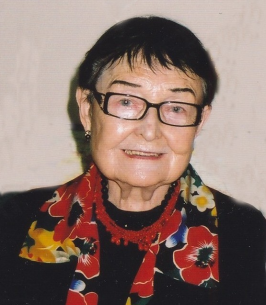 PLAWUSZCZAK, Vera (KE) -
Actress, writer, photojournalist, and cultural and civic leader. Born in Sambir, Ukraine, in 1927. Passed away on 23 October 2019 in Toronto. Daughter of actors Lawro Kempe and Claudia Kempe Hosch. Loving wife of Roman Plawuszczak (d. 2011). Beloved mother to Ulana Plawuszczak Pidzamecky (Taras) and Tania Plawuszczak-Stech (Marko). Dearest grandmother to Wasyl (William), Sophia, and Oleksa (Alexander) Pidzamecky. Performed on stage from childhood, along with her parents. Studied at the Institute of the Order of Saint Basil in Lviv and later in Stanislaviv, Vienna, and Innsbruck. Migrated during World War II; was in the displaced persons camp in Landeck, Tyrol, Austria. Settled in Toronto in 1949. Joined the Canadian Armed Forces Reserve. Was a member of the Ukrainian Women’s Organization of Canada and staged and performed in comedy revues. Performer in the theatre troupe of the Ukrainian National Federation in Toronto. Co-founder and archivist of the Canadian Ethnic Journalists’ and Writers’ Club. Columnist and sectional editor for The New Pathway Ukrainian weekly newspaper for many years. Author and presenter of editorial commentaries and host of culinary segments on Svitohliad TV. Author of numerous humorous texts, articles, and poems and well-known entertainer. Recipient of numerous professional and community awards, including the Taras Shevchenko Medal and the Queen’s Diamond Jubilee Medal. Vera brought great joy to her family and delight to her community, not only through her many talents and activities but also by her loving and generous nature, optimism, and endless good humour. Her bright and active mind was a source of inspiration to her children, grandchildren, and anyone who knew her. Vera will be deeply missed and lovingly remembered. Family and friends will be received at the NEWEDIUK FUNERAL HOME, KIPLING CHAPEL, 2058 Kipling Avenue, (North of Rexdale Blvd.), Toronto, on Sunday, October 27 from 2-4 p.m. and 6-9 p.m. (panakhyda at 7:30 p.m.). Divine Liturgy will be held at St. Demetrius Ukrainian Catholic Church, 135 La Rose Avenue, Toronto, on Monday, October 28 at 10 a.m. Interment to follow at York Cemetery, 160 Beecroft Road, North York. The family expresses its sincere thanks to Father Ivan Palisa of St. Demetrius Church for his pastoral care and especially to the devoted staff of Eatonville Care Centre (particularly Vera’s PSW, Filomena) for their professionalism, kindness, and support, which will never be forgotten. In lieu of flowers, donations to the Canadian Institute of Ukrainian Studies (CIUS), the UNF Foundation, or St. Demetrius The Great Martyr Ukrainian Catholic Church would be greatly appreciated by the family. Online condolences at newediukfuneralhome.com