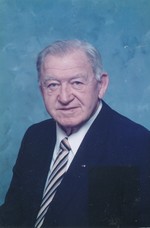 KRYKLYWY, Michael -
Michael Kryklywy of Toronto, Ontario died peacefully in his sleep on March 21, 2019. He was husband of 65 years to Pauline; father to 3 sons Kenneth (Kathy), Peter and Russell (Kelly); and had 4 grandchildren and 6 great- grandchildren. 'Mike' was born on September 6, 1930 near Ethelbert, Manitoba. He grew up on a farm during the Great Depression. After his schooling, he traveled to Toronto, Ontario to seek new opportunities. He found work with the Canadian Pacific Railway shoveling coal and stoking the fires of the old steam locomotives. He advanced with C.P. to diesel locomotive engineer where he retired 44 years later. Mike enjoyed family camping trips with his young family and after retirement, numerous vacations to the Caribbean, especially Cuba. More recently, Mike enjoyed visits from children, grandchildren and great grandchildren. Rest in peace Mike. The family will received their friends at NEWEDIUK FUNERAL HOME, KIPLING CHAPEL, 2058 Kipling Avenue (North of Rexdale Boulevard) on Friday, March 29, 2019 from 5-8 p.m. Memorial Service in the chapel on Saturday, March 30, 2019 at 11 a.m. Online condolences at newediukfuneralhome.com