To share your memory on the wall of Helen Gregorash, sign in using one of the following options:

Provide comfort for the family of Helen Gregorash with a meaningful gesture of sympathy.

Born Oct 23, 1928 in Guernsey, Saskatchewan to Irene (Konawalyk) and Lazor Solnenko who immigrated from the Ukraine around 1911.

Born Oct 23, 1928 in Guernsey, Saskatchewan to Irene (Konawalyk) and Lazor Solnenko who immigrated from the Ukraine around 1911.

Survived by sister in law- Jane Solonenko of Oakville (wife of brother Walter).

Helen was vivacious, determined, energetic, social and dedicated to her family.

Helen was born in 1928 in Guernsey, Saskatchewan which is right on the northern arm of the TransCanada Highway #16 that goes through Saskatoon. The family then farmed in Weekes from 1936-1941. When her eldest brother died from appendicitis the family moved to Windsor, Ontario to their uncle, John Konawalyk (her mothers brother). However, Lazor couldn't find work in that area so Lazor joined the army in 1941 with the Canadian Home Guards as a cook and he was then transferred from Windsor to Gravenhurst where he worked in the officer's mess in the prisoner of war camp.
At the end of the war they moved to Toronto for a short time before settling in Niagara-on-the-lake. In 1947 Helen met Dave at a ballroom dance class. She walked up to this handsome man who looked like Victor mature and asked him to dance for the ladies dance. The rest was history. They married in October 1948, when Helen was 20 years old.
Their family blossomed when in 1951 they had a daughter Donna Marie and in 1953 a son David Allen. Helen and Dave worked together at the Gregorash Food Market from 1948 to 1954 in St Catharines. In 1955, looking for a more steady income, Dave moved the family to Fort Erie and joined the Canada Customs working on the Peace Bridge that goes to Buffalo. The family then moved to Toronto in 1960 when Dave took a job with Special Excise collecting excise tax from distilleries, breweries and cigarette factories. In 1961 they bought a home at 99 West Deane park Drive where they lived the rest of their days.
Helen worked as a bank teller for a few years and then as a book keeper for Bittner Meats and Delicatessen in Etobicoke to provide extra money for their children's education and activities. She dedicated her life to her family. Helen and Dave frequently spent their summer holidays travelling across Canada and the U.S. to spend time with their extended family. Both before and after retirement, Helen relished the role of grandmother to her 7 grandchildren and was very much involved in their upbringing and played a major role in their lives.
Dave and Helen went to every Ukrainian church in Toronto but when they attended St Demetrius church, there was a welcoming committee and they felt like they had come home surrounded by friendly people.Helen was active in the church women's league, bowling league and helping with fashion shows.
After retirement, Helen had to have an artificial heart valve placed because of the heart damage caused by rheumatic fever when she was younger. Later in life she suffered a number of small strokes which left her physically disabled. But her spirit was good and she still enjoyed her family and visits from friends.


She was a Founding member of St Demetrius Church, 135 La Rose Avenue, Etobicoke where she would like donations made. Donations to Dorothy Ley Hospice would also be appreciated.

Consider providing a gift of comfort for the family of Helen Gregorash by sending flowers.

We encourage you to share your most beloved memories of Helen here, so that the family and other loved ones can always see it. You can upload cherished photographs, or share your favorite stories, and can even comment on those shared by others.

Posted Feb 20, 2019 at 02:04pm
We are so sorry for your loss, may all those wonderful memories comfort you in your times of sorrow.
Comment Share
Share via:
VF

Posted Feb 12, 2019 at 02:26pm
Donna and David and families: Sorry to hear of your mum's passing. She was a wonderful, warm-hearted lady, and a great friend to my mum and the 'bridge ladies'. I remember her as loving to cook and putting on a spread, the bigger the group she was feeding the better. Many was the birthday cake she baked for my mum over the years! She was such a generous soul, and you will all have amazing memories to keep in your hearts.
Comment Share
Share via:
ER 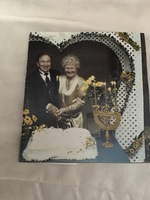 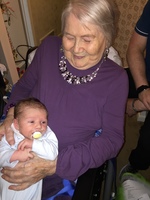 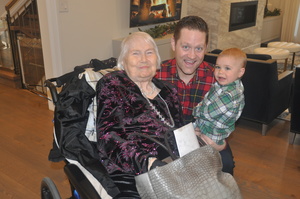