To share your memory on the wall of Gianni Biral, sign in using one of the following options:

Consider providing a gift of comfort for the family of Gianni Biral by sending flowers.

We encourage you to share your most beloved memories of Gianni here, so that the family and other loved ones can always see it. You can upload cherished photographs, or share your favorite stories, and can even comment on those shared by others.

Posted Jan 25, 2019 at 08:15am
Dear Irene and family, my deepest condolences to you, Adriana, the boys and your family during this tragic time. Much love from, Jessica
Comment Share
Share via:
AJ

Posted Jan 24, 2019 at 09:13pm
In loving memory of Gianni Biral. We will miss him dearly. Our thoughts are with Irene, Anthony, Daniel and the family. He will stay forever in our hearts!

Posted Jan 24, 2019 at 08:21pm
On my behalf and on behalf of all the members of the Gruppo Eta` d'Oro of the Famee Furlane, I convey our most hart Condolences to Gianni's mom, Adriana and to all the Biral Family members.
Nino Blasutta, President G.E. d'O. F.F.
Comment Share
Share via: 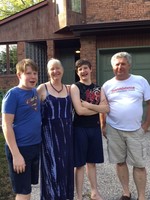