In Memory of
Ruth Kathryn
O'Driscoll
2018
Click above to light a memorial candle. 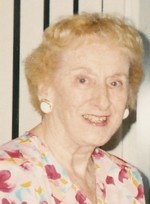 O'DRISCOLL, Ruth Kathryn (nee Dillon) -
(August 1, 1924 - April 21, 2018)
Ruth O'Driscoll passed away peacefully at Kipling Acres, Etobicoke, on Saturday, April 21, 2018 at the age of 93. She was predeceased by her husband Frank (Daniel Francis) O'Driscoll of the Metro Toronto Police Force who passed April, 1994. They were married in July, 1969 and celebrated 24 years of marriage together. Ruth was born in Elmira to Alma (Forwell) and Gerald Dillon and was the third eldest of eight children. She was predeceased by siblings Connie (McDonough), Neil Dillon, Bernice (Meyer) Michael Dillon and Thomas Dillon and is survived by Bette (Pauli) and Elaine (Forler). Ruth started her career at the Elmira Furniture Company in 1942 in an administrative capacity and worked at the following companies during her 32 year career, including Parker Pen, Eaton's, Molson Brewery, Avon, Gutta Percha, Union Carbide, Facelle, Dominion Stores and finally the Toronto Star. Ruth was a lover of dogs and raised beagles throughout her life. She was an avid gardener and enjoyed spending time at the cottage during the summer. All will miss her wicked sense of humour and her infectious laugh. Resting at NEWEDIUK FUNERAL HOME, KIPLING CHAPEL, 2058 Kipling Avenue, Toronto (North of Rexdale Boulevard), on Thursday, April 26, 2018 from 6-9 p.m. Funeral Service will be celebrated on Friday, April 27, 2018 in the funeral home chapel at 11 a.m. Interment Queen of Heaven Cemetery. If so desired, donations in memory of Ruth may be made to the Canadian Cancer Society. Online condolences at newediukfuneralhome.com