In Memory of
Clarence Findlay "Clare"
Hewson
1934 - 2018
Click above to light a memorial candle. 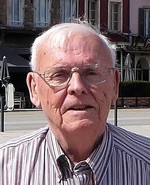 HEWSON, Clarence (Clare) Findlay -
(May 30, 1934 – February 9, 2018)
It is with great sadness that we announce that Clare Hewson passed away after a short illness on Friday, February 9, in his 84th year. Cherished and beloved husband and best friend of Ruth, adored father of George (Peggy), Susan, Brian (Martine) and Karen (David) and grandfather of Karen, Andrew, Kelly, Tracy and Brenda. Great grandfather to Robert, David, Abby, Brigitte, Dorian and Ronan. Oldest son of the late Edgar and Grace Hewson, and brother of the late Gerald Hewson. Beloved uncle to Linda, Ann, Mary, Cathy, John, David and Jeffery and to many grand nephews and nieces. Born in Saskatchewan, and a resident of Whitby from the age of six, Clare served the community in many ways, including the Kinsmen Club, Whitby Chamber of Commerce, Durham Construction Association, Durham Region Housing Authority and McLeod House, and was active in local, provincial and federal politics. A dedicated member of All Saints Anglican Church, Clare served in many capacities, including warden and lay minister for 40 years, and was always committed to helping the less fortunate, often through the charities of the church. A role model of integrity, kindness and generosity, he was also an entrepreneur and businessman, starting a steel fabrication company in 1956 and working in that sector until his illness a few short weeks ago. Clare was an avid traveller, visiting over 25 countries with his favourite travelling companion, Ruth, as well as other family and friends. Visitation will take place on Wednesday, February 14th 2018 at 1:30 pm at All Saints Anglican Church, 300 Dundas Street West, Whitby, followed by the Memorial at 2:30pm, also at All Saints. Those wishing to make a donation in Clare’s memory may do so to All Saints Anglican Church or the charity of their choice. Condolences may be expressed online at www.wctownfuneralchapel.com.