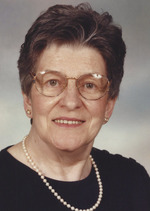 CHOW, Médérise “May” (nee Simoneau) -
Passed away peacefully on Friday, November 24, 2017, at Lakeridge Health Oshawa at the age of 85. Beloved wife of the late Lewis (2010). Loving mother of Caroline Stiers and her husband Dave, Robert and his wife Anne Higginson, and Isabelle and her husband Chris Coupland. Cherished grandmother of Stephanie, Tim, Owen, Addy, and Miles. Dear sister to Irenee and the late Gérard-Raymond. Fondly remembered by many nieces, nephews, and friends. Born in Pierreville, Quebec on October 13,1932, May worked for Bell Telephone in her hometown as chief telephone operator when she met Lewis. Their 3 children were born in Montreal; they settled in Whitby in 1973. She worked tirelessly raising her children and managing the household, several years of which were by herself when Lewis worked overseas. She worked as a babysitter for young neighbourhood children and became affectionately known as “Mama May”. She was a devoted mother and grandmother and absolutely adored her grandchildren. May also was very musical and loved playing the piano. Once her children were grown, she worked as a medical receptionist for Dr. W.K. Chang; she loved this job and enjoyed getting to know patients. She will be fondly remembered for her joyful spirit, sense of humour, and love of laughter and music. The family would like to express their sincere gratitude to the wonderful staff at Fairview Lodge for their excellent care and compassion over the years. Visitation will be held at W.C. TOWN FUNERAL CHAPEL, 110 Dundas Street East, Whitby, on Thursday, November 30 from 3 to 7 pm and Friday, December 1 from 9 to 10:30 am followed by funeral service 11:00 AM at ST. JOHN THE EVANGELIST CHURCH, 903 Gifford St., Whitby. If desired, donations in May’s memory may be made to the Alzheimer Society of Durham. Online condolences may be made at www.wctownfuneralchapel.com