In Memory of
Stephen Gardiner "Steve"
Ingram
1936 - 2017
Click above to light a memorial candle. 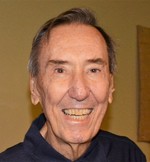 INGRAM, Stephen -
Passed away peacefully after a long battle with heart failure at Lakeridge Health Oshawa early on Sunday, June 4, 2017. Steve married the love of his life on October 8, 1966 and was happily married for over fifty years to Catherine (née Cleary). Sorely missed by his daughter Susan (Derryl) and son Sean (Mia). He is survived by his sisters Shirley and Judy, brother-in-law Hans Stapelfeldt, his nieces Tina and Jane (Jason), and the bright lights of his life – his grandchildren Seamus, Ciaran, Kaleb and Victoria. He will be missed by his aunts, cousins, in-laws, and friends. Pre-deceased by his father Seibert, mother Vivian (Ingram) and sister Peggy. Born in Christ Church, Barbados, September 11, 1936, Steve immigrated to Montreal in 1957. For more than thirty years he worked in leading manufacturing roles for Canadelle Inc. In 2001, he and Catherine retired to Whitby. The family is very grateful for the care Steve received over the years at the Montreal General, St. Michael’s Hospital, the Heart Health Institute and for the last six weeks, the Home Palliative Care team members and the nurses of the Supportive Care Unit. Visitation will be held at W.C. TOWN FUNERAL CHAPEL, 110 Dundas Street East, Whitby, on Thursday, June 15, 2017 from 5:30-8:30 pm and Friday, June 16 2017 from 10:00-11:00 am. A Funeral Service will be held at W.C Town Funeral Chapel on Friday, June 16, 2017 at 11:00 am. In lieu of flowers, donations in Steve’s memory may be made to the Heart and Stroke Foundation, St. Michael’s Hospital or the Yonge Street Mission. If desired, condolences may be expressed online at www.wctownfuneralchapel.com.
Printable
Share on Facebook
Recently Shared Condolences
Leave a Condolence
View All Condolences
Recently Lit Memorial Candles
Light a Memorial Candle
View All Candles
Recently Shared Stories
Share a Story
View All Stories
Recently Shared Photos
Share a Photo
View All Photos